What is Asbestos and why is it so dangerous? 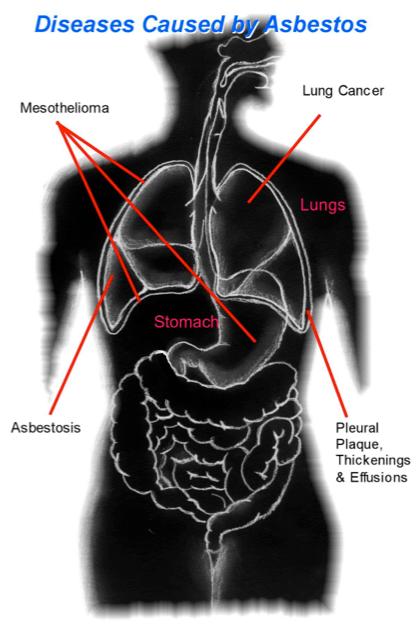 Asbestos is a naturally occurring fibrous mineral that became popular among manufacturers and builders during the 19th century, due to its unique properties of fire resistance, tensile strength, sound absorption, low electrical conductivity and chemical resistance. It quickly became a cheap and simple way to solve many material design problems.

There are three main types of asbestos that have been used commercially: crocidolite (blue asbestos), amosite (grey/brown asbestos) and chrysotile (white asbestos).

The difference between these types has to do with the shape and size of their fibres. Although all types of asbestos have been found to cause asbestos-related diseases, some types lead to more of these health problems than others. Blue asbestos is the worst for human health, followed by grey/brown, and then white.

So why is asbestos so dangerous?

Breathing in asbestos fibres can cause asbestosis, pleural disease, lung cancer and mesothelioma. The risk of contracting these diseases increases with the number of fibres inhaled and the risk of lung cancer from inhaling asbestos fibres is also greater if you smoke. The symptoms of these diseases do not usually appear until about 20 to 30 years after the first exposure to asbestos.

Asbestosis is scarring of the lung tissue causing the lung to become less flexible or elastic or ‘fibrotic’, therefore making breathing increasingly difficult as the disease progresses. The airways become so inflamed and scarred that oxygen is no longer able to pass from the lungs in to the blood. Symptoms include tightness in the chest, dry cough, shortness of breath and in the later stages, a bluish tinge to the skin caused by a lack of oxygen.

Pleural disease occurs when asbestos fibres embed themselves in the pleura, the delicate membrane that surrounds the lungs and inner walls of the chest. This causes inflammation and irritation of the lining of the lung, which over time causes the pleura to stiffen and thicken, or fill with fluid. This thickening or ‘fibrosis’ can restrict the lungs, making breathing difficult or painful.

Lung cancer from smoking is indistinguishable from that caused by asbestos, however it has been found that exposure to both tobacco smoke and asbestos significantly increases (8–800 times) the chance of developing lung cancer.

Mesothelioma is a cancer of the pleura, the lining around the lungs. Most, but not all, cases of malignant mesothelioma are associated with asbestos exposure. Mesothelioma typically grows quickly and spreads widely before symptoms appear, therefore early diagnosis and effective treatment is very difficult. The average survival time after diagnosis is only 6-18 months.

It’s tempting to think asbestos is a problem from the past – however, the reality is that over two thirds of the houses in Australia today (including ALL of those built prior to 1984) will have had asbestos used in their construction in some form. For the homeowner or renovator, this can present a potential problem when maintenance is required or when that new bathroom upgrade is due.

If you suspect there may be asbestos in your home, consult a professional before undertaking any renovation or maintenance work. For more information, get a copy of our book Identifying Asbestos in your Home.